The ending of the famous much loved poem by Clement C Moore always makes me nostalgic as indeed does the opening line, ” Twas the night before Christmas when all through the house, not a creature was stirring not even a mouse….”

Growing up my mother was mostly responsible for making Christmas magic for us. She had lived in New York for 6 years with her cousins and brought home a few American classics one being the famous book by Clement C. Moore. She read it to us every Christmas and I adored it especially as the photos in it had a particular charm.

I also particularly remember the excitement of putting up the tree. My Dad was the local butcher and would go to the market in Dublin to get Christmas trees to sell outside his shop. He’d pick out one for us and leave it on the lawn for a few days with my mother nagging him to get the stand and put it up. Then the inevitable task of taking out the lights and plugging them in to see if they worked. He’d replace a few bulbs if necessary and then the rest was up to us. Opening the box of decorations was always a revelation to me, like seeing old friends reappear and getting reacquainted . There was lots of tinsel old fashioned and tawdry but I loved it, the baubles in different sizes and colours some with no string that my mother had skilfully repaired using my Dads pipe cleaners!

Then there were the decorations themselves. My mother had lived in the States for 6 years and we have lots of cousins still living around the NJ and NY area so she had been sent some fancy decorations including a little red cabin with snow on the roof, a reindeer that once held chocolates, two little angels with bells and santa himself hiding in some bushes. She also got creative one year and made decorations from felt, an elephant, a star and a heart as I recall.

Every year as we dug them out of the box it gave me a warm fuzzy feeling of familiarity and ritual which was so comforting. The tree would be decorated and the crib put up with its little blue light turned on and the angel watching over it all and we would wait then for the magic of Christmas morning. Christmas Eve was my favourite day of all. The sense of anticipation, a feeling of excitement in the air, my mother busy preparing the stuffing and my Dad in the shop awash in turkeys, hams and good wishes for a Happy Christmas. The day was always the longest as when I was a child midnight mass was actually at midnight. The feeling of going outside and driving to mass when you should be in bed always lent it that extra frisson of excitement . Both my mother and I were in the choir and we would stand in the gallery and sing our hearts out. One year on  Christmas Eve a wonderful  Italian tenor joined the choir as he was visiting family locally and that was my first experience of opera like singing. It is a standout memory in my mind to this day as the entire church was silent as his voice soared above the crowd. That mass had a tragic ending we could never have foreseen as our priest collapsed into the vestry as the last hymn sounded and died. I always thought in a way he was lucky as he died in harness as they say and was accompanied by the sound of angels as the voice of Mr.Bondino rang throughout the church.

This was the angel on our old crib growing up

My sister Cathy in front of a tree and crib. Funny how I though the tree was huge as a child

Now each Christmas I’ve done the same with my son putting up the tree and opening the boxes and exclaiming over the decorations of which there are so many I almost need another tree. I’m such a sucker for decorations and have bought some throughout the years in far flung places such as Sydney, Prague and California. In my early 20’s I visited the Christmas shops of Cape Cod in July and thought I’d died and gone to heaven stepping in from the sunshine to a winter wonderland.

This one came from Sydney

These arrived from our French friends

This belonged to my Sister-in-Law Petrina RIP

My dear friend Beth then introduced me to Edwins near her home in Franklin,MA and she and her parents bought me some of the wonderful Dickens village and the Christmas carollers.. The year we got married our dog at the time chewed some of the Christmas carollers and they had to be returned to Edwins for ” surgery” to repair them. They  were returned to us with the admonishment to keep them away from the ” foookin dog” This being a very good imitation of what I called her when I found my poor figures chewed and lying in her bed. Now every year as I unpack them I smile with the memory of Mr.B  and his Irish accent. 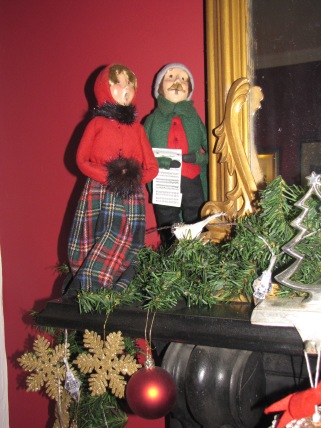 Every Christmas since he was born Sean has received an ornament in his stocking and wherever possible I wrote the year on the base. 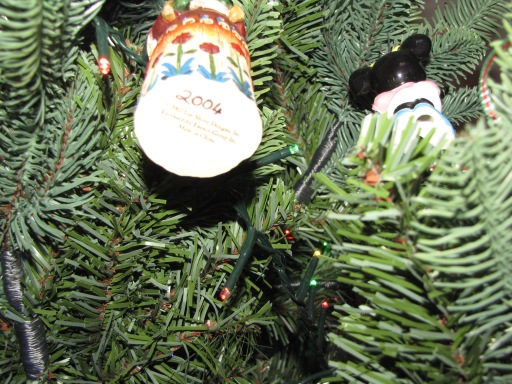 This was a lovely idea I stole from my sister in law who has done it for her boys with the intention that by the time they have a tree in their own home they’ll have a ready made ornament collection. I hope that in years to come he’ll have the joy of unpacking the decorations every Christmas and that it will trigger many happy memories of Christmas past. 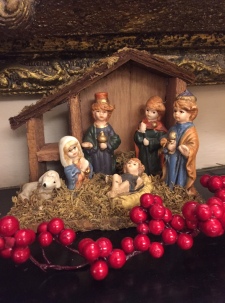 So to everyone out there wishing you the best of the Christmas season and to quote Clement C. Moore

Happy Christmas to all and to all a good night…

View all posts by theinsomniacgardener